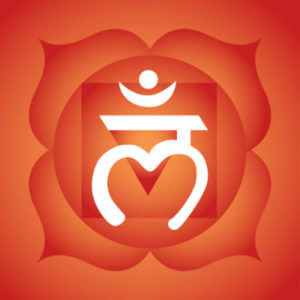 The first chakra is also known as the Root Chakra. Its color is bright opaque red, and its symbol, in most representations, is a 4-petaled lotus. The root chakra symbol also includes a square, representing a solid base. In humans, the root chakra location is the perineum and the first three vertebrae (animals also have chakra, sometimes in different physical locations depending on their body shape).

In Sanskrit the root chakra is called Muladhara, meaning “root support.” While the root chakra meaning might seem straightforward at the first glance, there’re many unexpected layers and nuances to it in real-life application – all of which we’ll cover below.

The root chakra crystals include hematite, smoky quartz, red jasper, brecciated jasper, and most red stones. The root chakra planet is Earth, representing our life base, but in Eastern literature, the planet of Saturn has also been widely associated with the first chakra as Saturn represents discipline, permanence, stability, and productivity – all of which are strong signs of a healthy first chakra.

A healthy root chakra is automatically developed in babyhood as long as the baby is genuinely loved and held by the mother or the primary caregiver, and the environment is calm and stable. Any type of rejection by the caregiver, which could be due to the baby’s appearance, health situation, sex, the time of its arrival, associated economic difficulties (baby means more expenses) etc. is always deeply felt by the baby, and the negativity coming from the caregiver is internalized as self-hatred: “something is wrong with me,” or “I’m not loveable.”

In babyhood, such failures of the environment and the adults make the baby turn against itself in a deep subconscious place – even as young children we do this, as we don’t yet realize that something could be wrong with adults. We view adults as gods! As we become adults ourselves, many of us carry negative beliefs about ourselves and the world, and we don’t understand why we aren’t able to create positive, stable, abundant environments for ourselves. We recreate what we learned in babyhood.

When the root chakra is imbalanced

A disfigured, undercharged, overcharged, or torn root chakra affects your ability to manifest financial abundance for yourself. Like the baby depending on the breastmilk, we all depend on the universe for our livelihood. There are people who work so hard yet never have enough. They might sometimes blame the universe – an “entity” out there isn’t giving them the milk. Healing the root chakra would render this blame-game obsolete, and teach the individual to take true responsibility and trust the environment. A healed root chakra would transform old negative beliefs about the environment’s capacity to give you.

If you were raised in a violent environment where there was domestic violence or a lot of screaming, or if your parents struggled financially and constantly worried, you might have a damaged first chakra. This type of environment might have given you a deep root chakra blockage – one that would cause you to have difficulty manifesting or saving money, and cause you to mistrust most people, workplaces, and even your mates. You might have paranoid tendencies.

Health issues associated with this chakra include bone disease (underlying belief: “I am not supported; I can’t support myself or anyone else; I don’t feel solid.”), problems with the ankles, legs or knees (“I have difficulty moving forward”). In severe cases, a root chakra imbalance can lead to paranoid schizophrenia (“the world is a severely judgmental, harsh place; I need to escape”)

How to open root chakra

A super simple root chakra healing technique is to sit down in a meditative position, in a quiet room, legs crossed and back straight, making sure you won’t be disturbed for at least twenty minutes. Close your eyes and place your hands on your knees, legs or perineum if you can. Let go of any thoughts or fears you may have and visualize this area filling up and illuminating with a bright red glow. This is a root chakra meditation; it’s more than just visualization, so, try to commit to it.

Breathe deeply and imagine loving support entering your life. Feel the ground under you, or the chair, and remember that you are supported by it. If you’re interested in doing a root chakra sleep meditation, imagine red all around you and inside you before you fall asleep. Feel your bed and pillow supporting you.

The above technique is great for those with an undercharged, closed, or disfigured root chakra. But some of us have excessive energy in our root chakra. Those of us who are too disciplined, almost robot-like, who save every penny and even avoid buying a bottle of water when we’re thirsty because it’s fifty cents cheaper somewhere else, or who only work and work and work because any other activity causes fear of losing control, have too much life force in the muladhara chakra.

To release the accumulated excess energy in your root chakra, work with a therapist or counselor to explore how your babyhood, childhood, or even your recent/current environment has affected your soul. You’ll need to learn to trust that you can create abundance for yourself without hating your life or yourself, and that you don’t have to work endless hours to make that happen. You’ll need to realize that the “universal milk” is there for your taking, that it doesn’t need you to be burnt-out to earn it. You can also work with a psychic to make healthier choices – choices that concern your future.

Root chakra yoga poses include any pose where you stand on your feet including balance poses. Even in simple standing poses, remember your feet and feel the support the Earth underneath is providing. 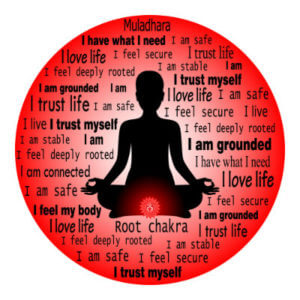 “I have the right to exist.”

“Abundance is my birthright.”

“The universe is generous and I’m open to receiving.”

To heal the root chakra, you can also wear a bright red or red shirt, pants or a scarf, get red pillows or throws for the living room and add a new pop of color to your life that way. Given the location of this chakra, wearing red pants, socks or shoes is extra effective. You can also paint a water bottle bright red, and drink water from that bottle for a few weeks. You can paint your nails red, or paint a canvas in shades of red.

If you’d like to wear root chakra stones or have them around your house, obtain hematite, smoky quartz, red jasper, or brecciated jasper. You can wear them as jewelry or put them in different rooms in your house. Make sure to regularly wash your crystals with mild soap and water, and give them some time in the sun – this will charge them and keep their energy properties intact.

If you practice yoga, get a bright red yoga matt. If it feels too much, opt for brown or earth tones.

Find out more about the other six chakras: