Meaning: One’s own base 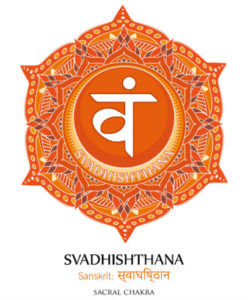 The second chakra is also known as the Sacral Chakra. It’s located about 2 inches below your navel or belly button. Its color is orange, and its symbol is a 16-petaled lotus. Its meaning, in Sanskrit, is “one’s own base,” for the following reasons.

Having firmly established itself in the first chakra where key survival issues such as food, shelter, and financial stability have been taken care of, the soul then moves on to establish a sense of individual self in the second chakra – the same way a young child realizes he or she has a separate self than the mother and others.

This chakra has to do with our basic creativity, just like the way any child explores his or her environment. This type of creativity has to do with exploration and thinking outside the box to make life easier. We find pleasurable shortcuts to do things in less time and be more efficient. Here also begins our relationship with our own self, as we realize we are the receivers of this pleasure.

Second chakra is where we explore sexuality as it’s where we begin to relate to others physically and where we discover the pleasure principle in relation to our own body. Any sexual abuse or harassment damages this chakra – even a verbal threat is enough to deform, discharge, or tear open the vulnerable second chakra. But there are a lot of other factors that can damage this chakra – such as emotional abuse, poverty, or even psychic invasion.

When the second chakra is imbalanced

A disfigured, undercharged, overcharged, or torn second chakra affects our ability to go with the flow of life. We fear touching someone we find attractive because we fear what they might do to us. We hesitate before eating something we love because we’ve been told it’s fattening or not good for health. On the flip side, we eat utterly unhealthy things in an addictive way and abuse ourselves the way our parents or other adults abused us when we were little. We do to ourselves what was once done to us, only because we don’t know any better.

People who were raised in austere environments where food was for survival and not for pleasure, where time was always in short supply and there were many tasks to carry out, where religious, social or moral values dictated how life was to be lived every minute etc. have trouble letting pleasure into their lives as grown adults.

Guilt and addictions are the psychological difficulties that come with a traumatized second chakra. This happens when we don’t allow ourselves to have pure pleasure, just for the sake of pleasure. Guilt, lack of and desire for pleasure, and addictions are intertwined closely. A severely damaged second chakra prevents us from connecting with others just for the pleasure of relating to fellow human beings, and lack of connection causes addictions. Some say that the opposite of addiction isn’t sobriety, rather, it’s connection.

Health issues associated with this chakra include prostate and gynecological problems, bladder issues and lower back pain. Blocks may come up here, with guilt, shame, inability to accept change and fear. Other issues include sexual dysfunction including erectile functions in men, and an inability to reach vaginal orgasm in women.

Any power games you play around sex can be considered an emotional health issue. Do you withdraw sex to manipulate your partner? Do you use sex to appease them and get what you want? Sex should be just another way to express love, without any power games or manipulative purposes. If this isn’t the case, work to heal your second chakra with the practices we list below.

Many of us have an undercharged second chakra. Sit down in a meditative position, in a quiet room, legs crossed and back straight. Make sure you won’t be disturbed for a while. Close your eyes and place your hands on the part of the body where the sacral chakra is located.  Let go of any intentional thoughts or fears you may have and visualize this area filling up and illuminating with a bright orange glow. Imagine a great warmth spreading over you and happiness and excitement entering your life. Let go of all that is blocking you and replace it with openness, happiness, and great pleasure.

The above technique is great for those with an undercharged or disfigured second chakra. But some of us have excessive energy in our second chakra. Those of us who use seduction to get what we want, who manipulate others to make them do what we desire, who don’t have good emotional boundaries actually have too much life force in the sacral chakra. Chakra should be charged but too much charge causes an imbalance in any chakra, and affects other chakras too. 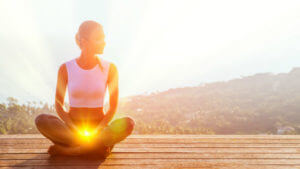 To release the accumulated excess energy in the second chakra, work with a therapist or counselor to do inner child work to uncover cues from your childhood. Most likely, in order to get attention or love from a parent, you had to use seduction (seduction doesn’t have to include sexuality – it can be purely emotional, can include nonverbal cues etc). The said parent was either emotionally unavailable or didn’t know how to connect with others. So, you, as a child, did all you could to form a connection.

You can also do movement therapy. If you have an addiction, try an anonymous 12-step program and stick to it. Keep a journal and track your progress. Be gentle with yourself – people with unhealthy second chakras tend to be susceptible to judgments and criticism, including and especially coming from within the psyche. So if you find yourself judging your every behavior or emotion, remember, nobody is perfect. Being human means being imperfect – so we can evolve. So, there is some place to go for the soul.

To heal the second chakra, you can also wear an orange shirt, pants or a scarf, get orange pillows or throws for the living room and add a new pop of color to your life that way too. You can paint a water bottle orange, and drink water from that bottle for a few weeks. Paint your nails bright orange, or paint a canvas in shades of orange.

If you like wearing stones or having them around your house, obtain orange and coral calcite,

citrine, orange carnelian, or orange adventurine. You can wear them as jewelry or put them in different rooms. Make sure to regularly wash your crystals with mild soap and water, and give them some time in the sun – this will charge them and keep their energy properties intact.

Find out more about the 6 other Chakras including: