At the hands of a good psychic, Tarot readings are known to be incredibly, spookily accurate. They show the people involved, the details of the situation, the past, the present, the future, and they even give multifaceted advice to help the querent make the best choice as they move forward.

While novice readers tend to begin learning the Tarot by memorizing the cookie-cutter textbook meanings of the cards, veteran readers know that cards talk to each other in a reading – they form the big picture together. It’s not about each card – it’s about the relationships they create with one another in any single reading. The position of each card is crucial as the cards come together to create a storyline.

In any reading, whether it’s a love reading or a career one or anything else, Court Cards hold special importance. Court Card meanings can give substantial form to any reading, define the characters involved, and say a lot about their personalities and how their behavior might affect the outcome.

What are the court cards and what do they mean?

There are four Pages, four Knights, four Queens, and four Kings. So it goes like this: Page of Pentacles, Knight of Pentacles, Queen of Pentacles, and King of Pentacles. Each suit – pentacles, cups, wands, swords – has its own four court cards, totaling sixteen. Here are their meanings. 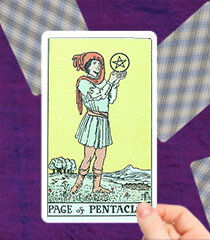 Someone who has a dream they’d like to manifest more than anything else. Someone with pure intentions and desires but not much life experience. This person could use some guidance or help as they don’t have the skills to lead a big project, a family unit, or a department at work. 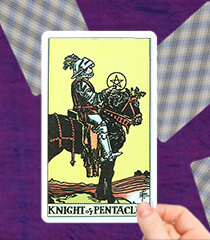 Someone who likes to take things slow, cultivate confidence and surety before acting. This is a person with dreams but also with a lot of patience. His dreams can take forever to manifest because he values stability and calm over anything else. Testing the waters comes first. 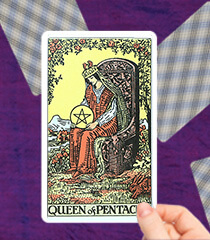 A woman who is content and pleased with what she has. There is abundance and stability in her life and this gives her psychological and worldly comfort. She might say she craves adventure but it ain’t going to happen any time soon. Her throne is too comfortable to walk away from. 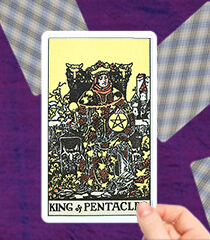 A man who has achieved material comfort whether through his own making or inheritance. He has what it takes to support himself and a family, and he is not the type who’d squander his fortune by buying unnecessary luxuries. He might seem boring but he is doing the right thing. 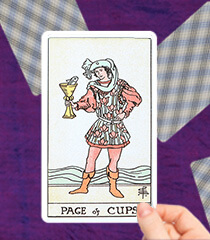 A happy-go-lucky person. Whatever he touches turns to gold but not because he knows what he is doing. He is on a lucky streak and no one knows if this is a lifetime trait or a fleeting thing. A dreamy person who trusts the goodness of the universe. Might sometimes be gullible. 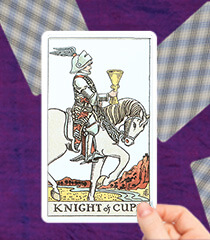 A man who checks with his heart before he acts. It might take him a while to act but when he does, it’s genuine and thought-through. Sometimes however, this man’s emotions might cause him to have aversion to risk. He is a hero in making; just needs to trust his masculinity more. 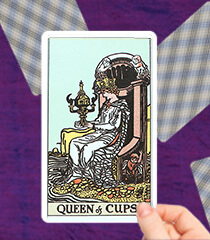 A woman whose emotions weigh her down. She might be carrying unresolved trauma or grief from the past. She needs to go deeper into her heart, explore the wound, cry it, express it, and heal it. This isn’t the right time for her to act or venture into new territories or adventures. 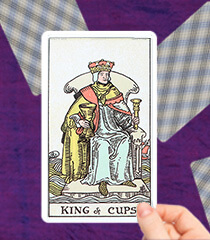 An older man comfortable with the life choices he has made, even though he might sometimes feel a bit lonely. He is in touch with his emotions and even though he isn’t rich, he trusts his ability to survive and thrive. He is comfortable where he is. He makes a good friend and a lover. 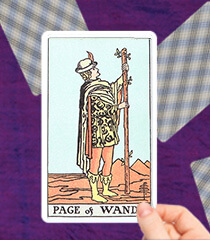 A lot of desire and ego strength with some hubris. The Page of Wands is like a young adult whose parents said yes to everything when he was little. He doesn’t know how to deal with obstacles. He might take them personally. He is a little narcissistic but it is endearing, too. 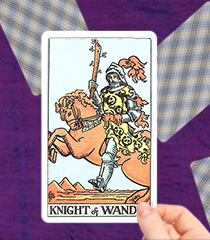 A passionate young man whose energy can be too much to take. He is ambitious but sometimes borders on greedy. His disposition might have to do with his difficult past, esp. his childhood. Try to understand him instead of judging him. He isn’t aware of his own emotional reality yet. 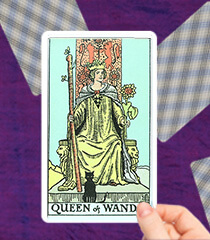 A wise, bountiful, generous woman. She has an open heart and helps whenever she can. Her black cat shows she is no pushover. She knows how to set boundaries and doesn’t mind being alone. Completely comfortable in her skin, she is manifesting her life’s dreams one by one. 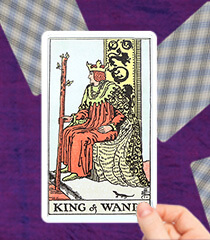 A man who has accomplished a lot but still holds grudges against people from his past. They could be former business associates or a former spouse, but he dislikes sharing his fortune. He believes it should all be his. This comes from a lack of trust in the universal abundance. 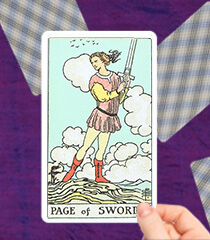 A young person who sees the world as a hostile place to conquer. Fights, arguments, capitalism, backstabbing – he believes all these to make up the world. Luckily, he can still change before these beliefs become his reality. Show him love and generosity. He is justafraid, that’s all. 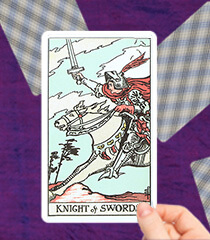 A knight who’ll chop anything and everything that’ll come his way. He never stops to check with himself or those close to him. He thrives on action but he also uses action to run away from his feelings. He works so hard because he wouldn’t know what to do with himself if he stopped. 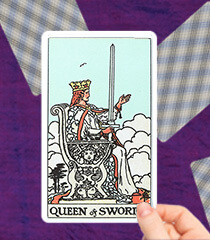 A lonely queen. Maybe a widow. A divorcee. A woman who’s experiencing heartbreak. She knows the future can be better but for now she is deep in her grief and this serves her. She doesn’t regret having lived what she lived. She honors it, the same way she is honoring her current feelings. 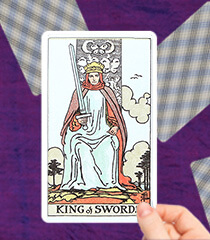 A king with deluded confidence. Like a leader who thinks he is amazing but leads a country into poverty. He needs to understand that he is fallible too. He needs to make peace with his imperfect humanness. It would serve him to listen to other people and tackle his subconscious feelings of inadequacy.

What is my tarot court card?

After reading all the above, wondering what your court card is? Your Tarot card can be any court card and it can change over time. It’s the one you feel most drawn to day after day, or the one that appears the most frequently in your readings in a position to represent you.

Craving more? Get a reading from a professional reader now.