Why Do People Believe In Astrology?

Have you ever heard someone referring to the position of the sun, moon or stars as an explanation for why a certain event happened or why they felt a particular way?

These people believe in astrology – and it can be difficult to get your head around if you’re don’t personally know much about the subject.

Those who believe in astrology share the perception that the things that happen in our lives, whether positive or negative, are affected by factors that are completely out of our control.

Many people turn to astrology as a way to understand why they were dealt bad cards in life. Connecting situations to astrological occurrences tend to have a comforting effect on people who believe in this area of study.

In simple terms, astrology is the belief that the stars and planets in our solar system can dictate the happenings in life. These distant cosmic entities, and their changing positions in respect to the earth, are considered to either determine human-related situations or indicate that something will happen in the future.

There are many different areas of astrology. The most basic study of astrology, which even beginner astrologers will likely practice, is the idea of horoscopes and star signs.

We’re each given a different star sign when we’re born, which is determined by the location of the sun at the time we were born. The position of the planets are entirely unique when we’re born, and they’ll never be the same again – which, according to astrology, makes us, too, unique and unrepeated.

Astrology says that things like human mannerisms and characteristics, and situations humans may find themselves in, are linked to our star signs. From star signs, the horoscope – a daily or weekly prediction of peoples’ lives in relation to their star sign – was born. 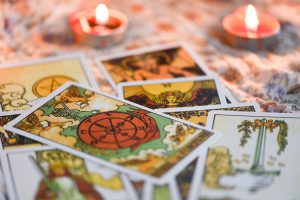 Millions of people believe in astrology to the point where they’ll mention their zodiac sign to explain a personality trait, read their horoscopes on a daily basis, and use astrology to explain why something happened to them.

But there is no scientific evidence to suggest that astrology is real. (Remember, astrology and astronomy are two different things – astronomy, the study of space and the universe, is proven on a scientific basis.)

It’s difficult to support the idea of astrology with science, as science demands hard facts, and that’s pretty much impossible when it comes to star-gazing, zodiac signs, horoscope reading, and so on. Science can’t make sense of something like astrology because of its randomness – there’s no definitive connection between how the position of the stars can possibly affect the events in your life or your personality.

Connecting To The Cosmos

Even though there’s a lack of scientific evidence, many people still use astrology for advice and reassurance. The reasons why people believe in astrology may vary from person to person, but for many, there’s a yearning for external meaning and guidance, especially in times of stress, or when life doesn’t seem to make a lot of sense.

Astrology is taken more seriously in some countries than in others. In India, for instance, the positions of the planets are used to dictate investments and even consider the compatibility between prospective husband and wife. In the US, many people take up the habit of reading daily horoscopes and discussing how their sun sign affects their behaviour.

How Astrology Can Help People

Just because there’s no science behind astrology doesn’t mean there’s not a more powerful force at work that’s beyond scientific belief. There are many spiritual aspects of life on earth that people find difficult to understand using common sense, and astrology gives a unique insight into a set of ideas that ask more questions than they answer.

If you’re someone who sees themselves as spiritual, you probably don’t need hard evidence to reinforce a belief you have. Astrologers feel the same way. People believe in astrology whether scientific research supports them or not.

Listed below are just a few of the ways that astrology can help people in one way or another:

Comforting in times of uncertainty

Astrology offers a means of explaining the uncertainty that life throws at us, which can help us to feel comforted and at peace. Whether you use astrology to predict what’s to come in your future or you simply accept that your fate is out of your hands, it can be a great source of comfort if you’re feeling lost or finding it difficult to cope.

If you struggle with control and blame yourself for the events that have happened to you in your years of living, astrology can often encourage you to see that these events were pre-destined and related to astrological occurrences in the world that were beyond your power.

Practising astrology, like reading, knitting or baking, is a calming, stress-free hobby. Taking the time to practice astrology on a daily basis can become a soothing daily ritual, and often, people find it therapeutic, meditative even, to reflect on horoscopes of the past days and link them to related events in the world, or consider what the future holds.

Some astrologists can even use astrology to identify a source of stress and better understand how they can relieve this feeling going forward.

Helps you get a better sense of who you are

It can be disconcerting to feel as if you don’t know your true self or why you’re alive today. A growing number of people believe that astrology can help us to get a better understanding of who we are.

People can spend their entire lives with no real self-awareness, which can make them much more vulnerable to their emotions. An astrologer has a clear understanding of themselves; the things they like and those that cause them stress, so they can take proactive steps to improve their mental wellbeing.

Helps you to understand others

As well as learning about how you think, people believe that astrology can also provide answers to other peoples’ thought processes. Being knowledgeable on not just your own star sign but the star signs as a whole will provide you with answers in situations where someone you know behaves in a way that’s confusing to you.

When an astrologer has this understanding of other people, they’re less likely to create conflict and more likely to extend a helping hand.

By using astrology to look into the future, people can get a good idea of the plans they need to make to achieve their goals. Astrology can’t predict exactly what’s going to happen one, two, ten years from now, but it can prepare you for the energies that lie ahead and give you a basic idea of what may be heading your way.

Getting Started With Astrology

If this article has piqued your interest, you may be keen to learn how to become an astrologer yourself. Whether you want to get answers to why certain events happened to you a few years ago, or you just like the idea of being able to think like an astrologer, it’s easy to get going.

Astrology may have become a growing trend amongst millennials and younger people, but don’t think that you’re excluded if you don’t fit this description. The astrological practice is for everyone, regardless of age, gender, what you currently believe, or how “good” you think you’ll be at picking up the subject.

There are many books you can read as an introduction to astrology. No matter how new you are to the subject, you can find plenty of simple materials that can teach you the basics of astrology, including what you need to know about stars, houses and signs.

If you really want to get into astrology, there are online courses designed for budding astrologers that work to provide you with new information around an astrological framework. You’ll be able to control your learning pace, but you’ll need to be serious if you’re considering a course, as they often have a price tag.

You will never know how astrology really feels until you give it a go. Often, people who begin as sceptics end up learning all about astrology and how it affects their own inner world, which completely changes their perceptions. To properly understand how astrology will affect your own life, you’ll have to test it out for yourself!