“In the original Hebrew of the book of Job (chapter xxxvii, ver.7), we find these significant words: “God caused signs or seals on the hands of all the sons of men, that the sons of men might know their works.”

Palmistry is one of the oldest studies in the world.

Palmistry is said to have originated in India and then spread throughout China finding its way to Egypt, Greece and then to Europe.   The reading of hands is not a mere superstition. It is a science that was studied by the ancients along with astrology and has developed and been used ever since, right up until this present day.

Despite the suppression of palmistry throughout the Middle – Ages and the prohibited use of it during the reign of King Henry VIII (who banned palmistry and other alternative practices, branding those who used it as sorcerers and devil worshippers), it has survived. In fact Palmistry is flourishing more than ever today, especially in these stressful modern times when we are all searching for truth and answers within ourselves. Many doctors and psychologists who have investigated its science have shown from their conclusions that hands have the potential to reveal a person’s character, health and psychological states.

Although Palmistry is a science and an art, by using psychic intuition a much greater understanding can be achieved. The one thing that many people do not know about palmistry, is that the lines on the palm as well as the shape of the hands may change, within as little as two-three months. 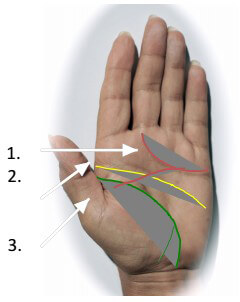 The hand shown here on the right is in some ways similar to that of Barack Obama, which I once read for a national newspaper. This was during his electoral campaign, before becoming president.

The top of the heart line (1) shows that this person may hold back with their emotions and could appear to others a little selfish at times. They will expect their needs to be met, especially in their personal life, and may even appear to be cold at times.

However, with the finer line descending from the heart this shows a slight contradiction, in that he may also give so much of him himself to others.

In such a way that confusion may arise between his head and heart. As he is giving from his heart, he may at times question certain things particularly when his generosity is not reciprocated I will often say to someone who gives so much in life to others; “Give from your heart and then walk away. Knowing that all things will return to us in many ways.

The other thing is; know your boundaries, and by using your intuition, learn to say `No` when someone may have over stepped the line. Of course; we also have the choice to give or not to give, but when we do give, we are always rewarded in so many ways, whether we are aware of this or not. Not that we should expect this”!

The gap between the head – line (2) and the heart line (3) show that this person is very independent and likes to be in control of their lives and possibly others.
However, they may be trying to control within the conscious mind a little too much. The conscious mind works on the day-to-day basis of logic. Our subconscious mind allows us to explore in greater depth.

So I would say “Allow the subconscious mind to take control at times. When we allow this to happen, we are creating a greater awareness from within, which will help us to find our path in life easier and with less stress!”

Quote from my book “Now it Begins”.

“Feel good and allow the confidence to grow from within as you are unique and there is no other you.
Now smile and know that all good things are coming to you easily and effortlessly”.